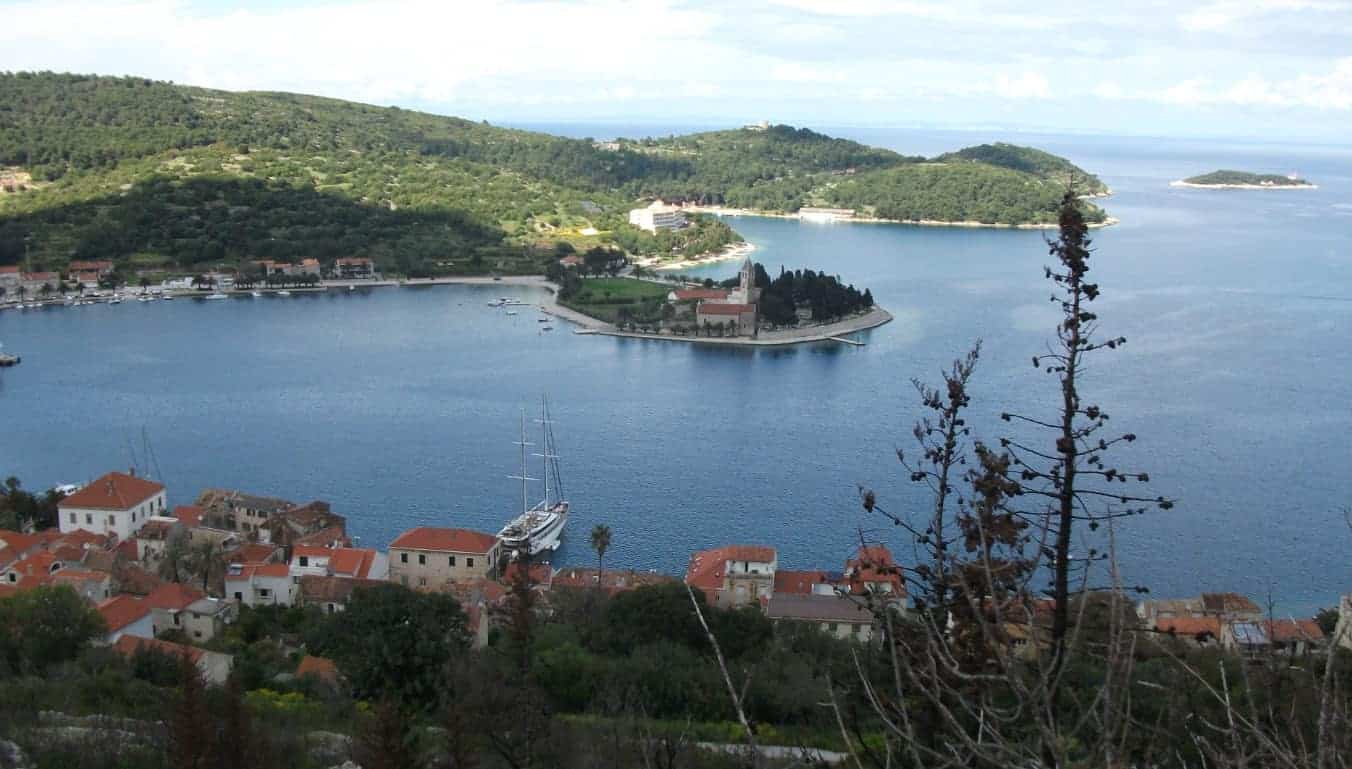 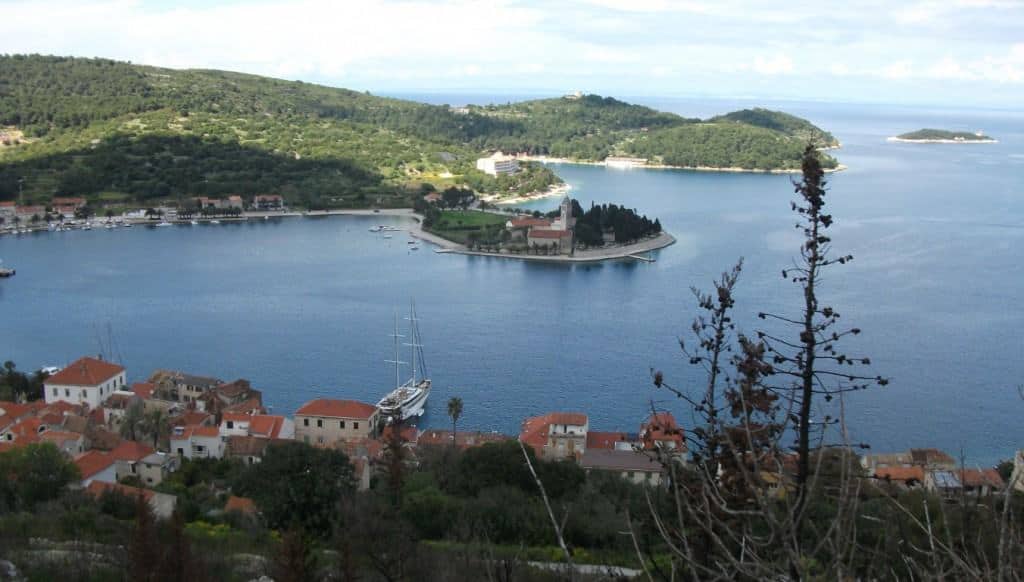 Many luxury charters in Croatia start from Split or Trogir – this is a one week itinerary to discover the Croatian coast, beautiful islands and fascinating towns. Of course you can book one-way charters for example to Dubrovnik as well. And there is more than enough to see and experience as well in a two week charter.

Board your yacht or gulet in Split, largest city of Dalmatia and well known for its medieval old town.
An ancient Greek colony named Aspálathos is said to be founded in the 6th century BC. But the major historical buildings in Split are built around 1700 years ago and show well preserved Roman architecture. Stroll around in Split, enjoy the charme of narrow streets and have a look at the most interesting sites like UNESCO protected Diocletian Palace, built by the Roman Emperor Diocletian, Diocletian’s mausoleum, Jupiter’s temple, the colonnades, early Croatian churches, Romanesque houses… 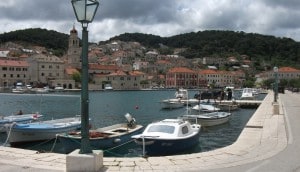 Cruise to Brač Island, largest island of Dalmatia. You can visit the small town of Pučisca with its beautiful harbour: it is the seat of the only stonemason school in Croatia, famous and unique, counting more visitors than some museums – old craftmanship is taught as well as modern techniques. Here is a perfect opportunity to buy your souvenir made of limestone similar to marble.  If you take a taxi ride on top of the mountain you have a fantastic view over to Hvar island and many more smaller islands. Evening and overnight in Milna: a typical village in the western part of Brač, founded by shepherds around 500 years ago, popular among sailors, featuring authentic Dalmatian restaurants and cafés – and a lot of Mediterranean atmosphere and charm.

Cruising from Milna to Pakleni Islands near Island Hvar –  with many small beaches and numerous hidden bays with crystal blue water. They are a small paradise right in front of hot-spot destination Hvar. Time for swimming, watersports, just relax…
Leave your anchorage after lunch for Island Vis. Vis is around half way from the Italian coast, its Italian name is Lissa – and for many years foreigners where not allowed to visit the island as it was an important army base until 1989. However the isolation preserved the natural beauty, the main village named Vis as well still is very picturesque with its big natural harbour,  the village of Komiza on the other side of the island, in just 10 km distance, is worth a visit as well. In Vis, there are a lot of wineries you can visit to taste the local wine.
One of the natural beauties near  Vis and national natural heritage is a cave called  Blue Grotto on the small neighbour island Bisevo. You can enter it with a dinghy to experience how  the natural light on sunny days creates a fascinating blue color inside…pure magic.

Leave  Vis for Lastovo, an archipelago of 46 scarcely populated islands with the main island and main village named Lasotov as well. Local fishermen can provide fresh seafood – those who love hiking find forests on the island – and divers can explore underwater life with wrecks of sunken ships.

The main town of the popular island of Korcula, named as well Korcula,  is sometimes called “Little Dubrvonik “-  it is full of culture, monuments  and history, the legend says it has been founded by the Trojans around  1200 BC.  A wonderfully romantic promenade runs through the town, lively  lively cafes invite for a stop. Korcula town which has been Venetian at this time is also claimed to be the birth place of Marco Polo. There is a marina in the mid of the old town! For swimming, several bays attract with crystal clear waters… the islet of Badija in the middle of the archipelago is perfect for a lunch break in a spectacular island scenery.

Jelsa, in former times a small fishing village, is a popular nautical destination because of its’ beauty and hospitality. From here you can walk winding paths along the coast through pinewoods or stroll  through picturesque villages and explore with rural roads and squares – and  valleys  with wonderfull  Mediterranean vegetation.

Cruising from Jelsa to Bol , the oldest town on Brac Island, the first tourist highlight on the island and today a popular resort:  It is lying on the southern coast of Brač and offers visitors cultural monuments, a picturesque small harbour  and natural beauties. There beautiful beaches, the most famous is Zlatni Rat, well known as “Golden Horn” because of  his shape stretching into the sea. This pebble beach changes its from often due to changing directions of f winds and waves.  Lunch in Bol – leaving after lunch for Hvar. 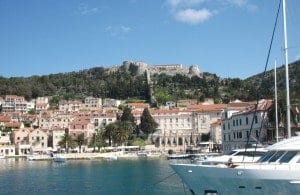 Hvar is the hotspot for luxury charter yachts – famous for nightlife and clubs, beautiful with its Venetian architecture….it  offers a mix of culture and a vibrant restaurant and café life. Despite its popularity, the town has preserved its authentical charme….and his special climate, with no less than  2,800 hours of sunshine a year. 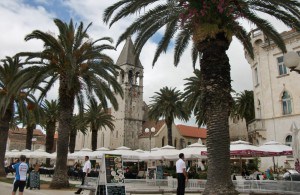 Leave  Hvar, after a stop in a secluded bay for watersports, swimming and lunch arrival in the fascinating town  Trogir.
It is part of the UNESCO World Heritage – Trogir is a charming small town lying on a peninsula connected to the mainland by a bridge. The town centre is full of narrow streets, stone houses and historical sites – the most important the Cathedral. And it is full of vibrant life: cafés and restaurants everywhere, Klapa groups singing the traditional songs, people strolling around…. and the city is  well known for its  night life, streets and clubs full of locals and tourists.

Leave Trogir and return to Split – after a swimming stop in some beautiful bay….

*Each cruise will be tailored according to your wishes and ideas and current weather conditions.
Please discuss details with the captain – often he has the best suggestions!